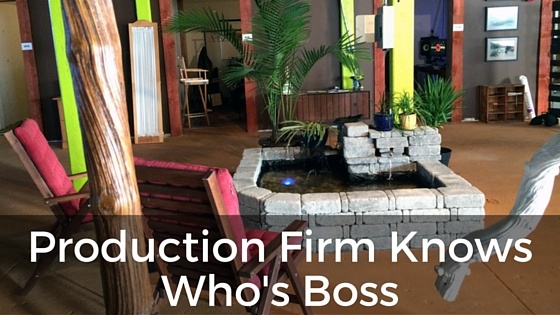 Hayes recently discussed the company with Daily News staff writer Bob Tremblay.
QUESTION: Why was the business started?
ANSWER: Our collective background is in storytelling. We came together as independent television producers and writers who wanted to bring our particular passion and creative to a broader audience.
We were producing several television shows in and around Boston when we started MediaBoss. At the time video marketing wasn't on everyone's radar. We saw a lot of businesses struggle to self-produce their videos and create storylines - or strategy - for their visual content. And likewise, we saw a need to include online content marketing for television programming.
We combined an agency with a production house to create a one-stop shop for all content creation.
Q: Why did you choose your current locale?

A: Framingham represents a thriving and diverse home for businesses. This is why so many large corporations such as TJX, Genzyme and Bose like to headquarter here. We represent the innovation and startup concept, which the town will hopefully see more of because it gives balance and creates new business opportunities.

Q: Has your business moved?
A: Our business has moved twice since we began. We doubled in size from 2008 to 2010 and we expanded again in 2013. We started off in a 1,500-square-foot space. We are now in an 8,000-square-foot space.
Q: What did you do before you started this business?
A: I was a writer at the Boston Herald. Our creative director was an independent television and video producer. Our production manager, Paul Bouley, was an editor and production assistant. Our animator/graphic designer, Nick Clarke, was an intern at Framingham State University.
Q: What does your company do?
A: We are content producers. This expands from television, filmmaking and video for the Web to visual and written content for the variety of social media platforms that are out there today.
Q: What makes you different from the competition?

Our clients know that whether they need branding, marketing and sales content, Web video, television commercials, television programming or even a film produced, we can deliver the product along with the creative side and the strategy to make their content stand out and reach the most amount of people possible.

Q: What is the cost of your service?

A: It varies from project to project.

A: We plan to continue to grow and serve our client base and add some new television projects. We're working a few television pilots, Web series and some creative projects.

One of our media and marketing clients is New England Studios in Devens.

Q: How many employees do you have?

A: Our team is six people. We expand our crew on a project basis. The six of us consider each other family. Ian and I are married and our employees are “aunts and uncles” to our daughter.

Q: Any news to report?

A: We just won two Telly Awards for our productions this year.