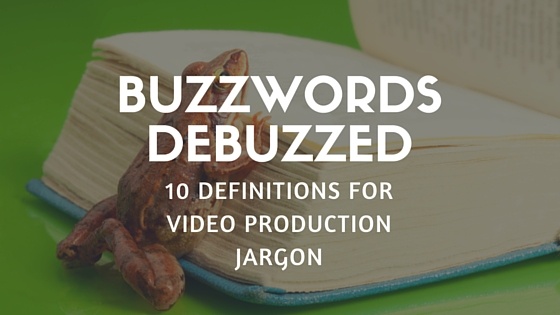 Fast forward through the better part of a decade and now I'm the one speaking production patois. Recently, I found myself talking with a client about filming their video. I told them we'd film with our matching c300s and prime lenses. Then I asked them if they had branding guidelines for the custom GFX we’d add in post.

I got some blank stares and it hit me. I’ve become someone who only speaks in model numbers and abbreviations! I’ve become one of them.

But this exchange got me thinking about the terminology we throw around in the studio on a daily basis. I started to make a list of the otherwise nonsensical phrases we use. It got long, quick.

For fun, I thought I'd share the first 10 terms/phrases that came to mind. Here's the list. And please feel free to add to it in the comments!

I thought I’d start off with this one. Turns out, Ian wasn’t looking for air conditioning that night. He was looking for an electrical outlet, or Alternating Current. Why didn’t he just ask if I’d seen an outlet nearby instead of AC? Because he’s been making films since he was 12 and people who make films say ‘AC’.

These are graphics that we add to video during the editing process. These could be animated lower thirds or supplemental visuals to help tell the story.

*Bonus: A Lower Third is graphic with the speaker’s name and title. It's called a lower third because it's usually placed in the lower third of the video frame.

There are many stories explaining the origin of this name, all of which are probably apocryphal. But the story we like the best (and feel is the most likely to be true) is the tale of: Evil Accounting versus Poor Production Crew.

Legend has it that in the early days of Hollywood, studio execs balked at spending money on an item as banal as the clothes pin.

They’d deny requests for clothes pins from the lighting department until, one day, the “clothes pin” line item transformed in to the commanding piece of equipment known as a “CP-47”.

And how could they deny their lighting crew such an impressive sounding piece of equipment?

B-Roll refers to the footage filmed by secondary cameras.

Back in the days of tape, the primary footage would be captured on the A Tape, or A-Roll. Once that coverage was complete, the tape would get switched and the B Tape would be inserted into the camera.

In the editing process, both tapes would be loaded onto the system and the editor would cut between the two.

Today, when we refer to "capturing B-Roll," we're referring to the atmospheric shots that help support the video’s story and add visual texture to the final product.

This could be the exterior of a building or a close up of a beer getting poured, etc. You get the idea.

Just today our Creative Director asked me to 'work on getting a bed’ for a video we’re editing.

I’ll be listening through our music track library, instead.

The ‘bed’ refers to background music under a narrator or foreground footage in a corporate video or commercial spot.

When you hear ‘get the sticks’ or ‘move the sticks’ don’t bother looking for fallen tree branches. ‘Sticks’ is production lingo for a tripod. 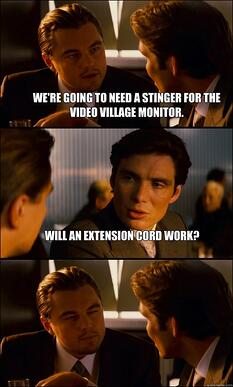 I always liked this term. A 'stinger' isn't anything that will prick or hurt you. It's an extension cord.

Here's a fun MEME created by The Black and Blue Blog:

This could be audio sweetening if music or voice tracks could use a clean up or a boost.

Sweetening could also refer to color correcting the video footage.

Timecode is an invaluable communication tool.

It is the clock counter generally found at the bottom of the screen of video footage. It starts with 00:00:00:00 at the beginning of a video and counts upwards for the duration of the video.

The zeros represent Hours:Minutes:Seconds:Frames of video.

It's used as a synchronization tool and for logging and identifying captured material.

We use it when we show first looks of a video to clients. But we also use it internally to streamline communication between a project's Producer and its Editor.

A producer might say to an editor, "Bring down the dBs in the music bed to minus-10."

They would be talking audio levels.

dB is the abbreviation for decibel. According to Wikipedia, "The decibel is a logarithmic unit that expressed the ratio of two values of a physical quantity, often power or intensity."

Does your head hurt yet? Because mine does.

Here's what you need to know: mixing audio takes work, precision and patience.

When done right, you don't notice how perfect the video's audio is. When done wrong, you're jumping up to turn down (or up) the volume every time a scene transitions to the next in the program you're watching. The worst.

Find out more about our production process: