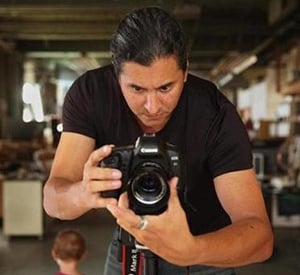 Ian Barrett is an award-winning director with 25 years experience Directing and Producing original content for television and film and web.

You don’t have a network budget, but you do have a great idea and some money. And you really believe your show idea can go somewhere.

It’s time to put that script and that budget on the line and get it made. But where do you start?

Many show pilots go on to become the first episode in a series. ‘Great!’, you think. ‘One out of the way.’

Well, yes and no. Because of this, there’s quite a bit of pressure to immediately engage and capture an audience.

Now, Netflix released some interesting data this fall that shows the pilot is rarely the episode that hooks a viewer. In fact, according to their data, that magical episode is usually between episode 2 and 8!

However, that doesn’t mean that the pilot can be phoned in. A 22 episode story arc won’t mean anything if the pilot falls flat on its face. Because chances are, you won’t be given the chance to either:

a) produce the remaining 21 episodes or

b) air the remaining 21 episodes.

Another obstacle is that your pilot really needs to look as much like a typical episode as possible.

That means it’s necessary to work as hard as you can to nail talent, locations, costumes, props, lighting and camera all at the same time.

What’s changed about the business is that web series have become the new concept development hot bed.

This means you can make a successful web series and get the attention of anyone from Producers to Network Execs to the actual Agents who are looking for vehicles for their clients.

That’s how “Broad City” came to the attention of Amy Poehler. She stepped in as Executive Producer and got them their deal.

When people approach us about producing their show pilot, it’s usually because people have expressed interest in their show idea.

Whether it’s an unscripted or scripted program, they need a pilot to fully pitch a network or sponsor and get the series funded.

Thanks to the rise of online video series, we’ve seen a spike in interest in pilot production in recent years. This is largely due to the fact that the number of outlets has gone from a few to hundreds.

And there is an entire business for branded web series (sponsored original content) outside of any network or distributor.

That’s always the first or second question people ask us, and we respond the same way every time:

How much does a car cost?

How much does a watch cost?

How much does a stroller cost? (new dad, here.)

It’s absolutely relative. But the important factors are the scale of the production: i.e. the number of days of shooting, locations, props, costumes etc.

What’s important is that your pilot looks like you are invested (read: you spent a lot of money).
Good production is absolutely the key component to making the people who watch your pilot go, “Wow” instead of “Ummm, we’re not interested.”

On our end we do everything on a fixed budget. This means you pay us and you get a guaranteed broadcast quality pilot that you can show to networks and sponsors alike, with no post-production surprises.

In addition, every element of the production will meet broadcast standards. This is critical, because in many scenarios your pilot becomes the first episode of the series.

You don’t want to do this twice. And in most cases, you won’t get that second chance, anyway.

Well, MediaBoss is a production company that produces unscripted and scripted television shows. We have created hundreds of hours of television and we bring that experience to the client. Our pilots are award-winning and have resulted in broadcast programs.

That’s important because making a pilot is a lot harder than shooting an episode that is part of an established series.

Everything is brand new in a pilot: the music, the graphics, the shooting schedule, the actors and crew and their relationship with the director.

It’s really difficult to make it look like this is Episode 100 and not Episode One, or the first time everyone has worked together.

But that’s the job we love and it’s where our experience pays off.

First, you bring in your script and meet the team. The team includes the producer, director, production manager and staff writer.

After a reading we do a script breakdown and figure out what needs to be done to make it happen. That’s where our budget comes from.

5. When does the shoot happen?

The first shoot happens after the budget is agreed on, a production agreement is signed, and a deposit is delivered.

The production agreement will outline the shooting, editing and delivery schedule.

But first, we get into the pre-production stage. Casting, locations, makeup, props, legal clearances are just a few examples of things that need to be locked up before you can start shooting.

Then there’s the conversation with the MediaBoss production team about your show’s “look”.

How will it be lit, shot and edited. The color palette, acting style, production style, etc.

The whole team needs to be on the same page with all of these elements. In the end, that’s what the director is responsible for on set.

So when that’s lined up it’s time to shoot.

It’s hell on wheels. I think the fantasy of the ‘set life’ and the reality are pretty far apart.

I’ve meet a lot of well-dressed directors on set and I have to say that on a managed budget production, you better see some sweat and a team of people hustling otherwise your not going to make your shot list for the day!

When you are shooting on a tight schedule with a lot of set-ups, you don’t have time to screw around.

You can’t afford one part of the production to hold any of the other parts up.

So, no you can’t take all day to light that cutaway. It needs to be lit and shot in 15 minutes. And you need to move onto the next thing and the whole crew has to be in synch with that.

Sets can go from chaos to ‘We are shooting this now, action!’ in a couple of minutes. It’s so important to have a good experienced crew, because they all know what’s needed and they do it.

The director also needs to get the best out of the actors and that rapport can’t take all day to develop. He also needs to know when to take an alternate shot or move on even thought something isn’t perfect, because time is the enemy and when you run out of that, there is no more production.

That’s not to say that the mood on set needs to be tense.

In fact, it should be the opposite and everyone should feel like they are on the same team working a very long series of days to an amazing goal.

A good director can make that happen, too. If you hear yelling on set, it’s not a good thing.

The best crews just know what to do instinctively.

Next is the post-production phase. This where all those pieces are edited together to create a program.

It’s important to remember that post-production is actually the bigger part of your budget.

There are no ‘simple’ edits. Everything needs to be done to the highest standard, from audio to color correction and effects to graphics.

It’s about a 5:1 ratio. Five days of post for every day of shooting. That’s not a fixed number. There are a lot of companies that can spend a month on a :30 second spot. But that’s not the world of pilot production.

Generally people want to start sharing a pilot as quickly as possible.

And then it’s done!

Now you take meetings, put it online, share it in festivals and try to get the series made.

We are happy that all of our pilot work has been so well received, regardless of budget. When people see a MediaBoss produced pilot the reaction is always, “That looks great!” We never want to hear that someone lost a gig to a poorly produced pilot. And trust me, we have met more than a few people who blew a budget on a pilot that they couldn’t even share with anybody when it was finished. This extends to the network level.

9. How do you prevent that?

Do your research. Find a good team. Manage your budget and be ready to show it to everyone you can.

Ask questions:
Are they insured?
How many things have they done?
What kind of cameras will they be using?
Audio?
What do they use for post-production?
Do they rent or own?
Do they have a studio?

Ask to see a reel of their work.

We have over 400 television shows and nearing a thousand videos under our belt. We pride ourselves on producing award-winning products for our clients. We are fun to work with and we get the job done, on budget.

We’re really proud of what we do and we are dedicated to making each product better than the last.

Check out MediaBoss’ pilot for the show “Partners”.