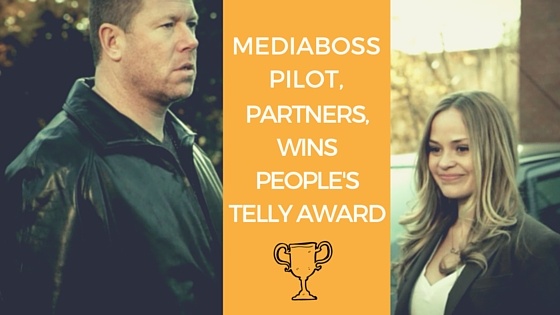 Partners follows the career of a female detective in an all-male police station. The pilot was written by Matty Blake and directed by MediaBoss Creative Director & Producer, Ian Barrett. Blake and Barrett are producing partners under their partnership company, Let the Boy Watch. The pair have worked together on several other comedic pilots and a variety of other productions.

"Filming Partners with MediaBoss and this cast was a like a writer/actor version of going to Disney World: Pure joy and magic,” Blake says. “We had so much fun but we also worked our butts off. A group of professionals getting together and playing our trade on our terms. Laughs yes, but we cared, we toiled, we strove. It wasn’t frivolous, it was rewarding. It’s the best kind of fun. It’s why we do what we do. We love the process!"

"It was a very fast paced set. We had a ton of set-ups to get through because we only had our cast for one day,” Barrett says. "Everything came together like magic, in the end we had more material than we could use! I can't say enough about how amazing the experience was."

The Telly Awards was founded in 1979 and is the premier award honoring outstanding local, regional, and cable TV commercials and programs, the finest video and film productions, and online commercials, video and films. Winners represent the best work of the most respected advertising agencies, production companies, television stations, cable operators, and corporate video departments in the world.

“The Telly Awards has a mission to honor the very best in film and video,” said Linda Day, Executive Director of the Telly Awards. “MediaBoss' accomplishment illustrates their creativity, skill, and dedication to their craft and serves as a testament to great film and video production.”

To see check out more of MediaBoss’ productions check out their portfolio: http://www.mediabosstv.com/creative-video