Q: What?
A: See Friendship

There’s a feature on Facebook called “See Friendship”. If you’re unfamiliar, log onto Facebook (in a separate tab to keep this page alive, please, this is all I have), pick one of your friends and click on the ellipses over their cover photo. In the drop down menu, click on “See Friendship”. The feature allows you to see your Facebook history with a person - events attended together, photos taken together, mutual friends, likes, and posts. Feel free to explore…I’ll wait.

Now, think about applying this concept to Twitter, but in a slightly different way. Since you are able to easily follow and communicate with those who don’t necessarily follow you back (i.e. celebrities, major corporations), the ability to “See Friendship” should apply to those relationships as well. You can already see what followers you have in common, but there’s no way to see previous tweets you have directed at other users and visa versa. This application, which I have termed “See Twittership” (yes, I just graduated college), would allow you to see previous Twitter interactions including tweets/replies, favorites, and common retweets.

That way you don’t have to take a screenshot when a celebrity interacts with you cause that’s lame. Who does that, what? Hello? 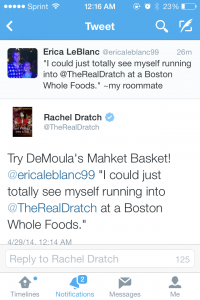 Q: Hello. Will Twitter pay you for this idea?

Q: Does writing “@Twitter” while not on Twitter mean the company is automatically notified you have said something to them?
A: …No.